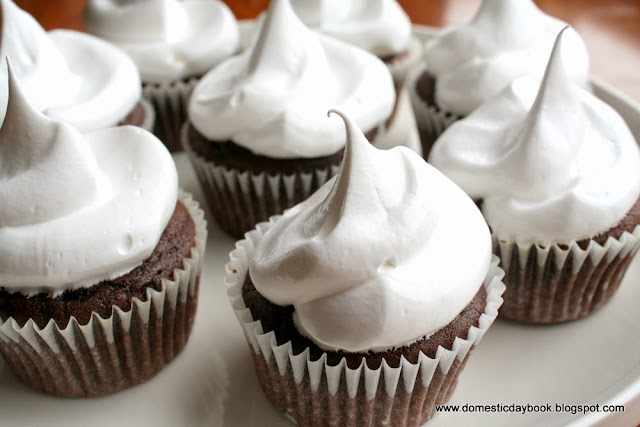 The other day, I did something that I never do.  I bought some Ding Dongs for my boys.  They, of course, were very excited and devoured them way too quickly, with the exception of son #3.  He wanted to save his until after he came home from school the next day, so I put it up in top of the cupboard to wait.

The following day, I noticed a Ding Dong wrapper on my counter.  I went to check on the Ding Dong in the top of the cupboard and it was gone.  It turns out that my husband ran onto it and helped himself, not knowing that son #3 was saving it for an after-school snack.  When my son got home he was devastated, so to make it up to him, I offered to make these fabulous chocolate cupcakes with fluffy white frosting.  They were as close as I was going to come to a homemade version of a Ding Dong.  Luckily, my son brightened right up at the prospect and we got baking.

These cupcakes are light and moist and oh so much better than any boxed mix, and the frosting ( a version of 7-minute frosting) is right up my alley - - light and not overly sweet, plus it is pretty easy to make.  So, I hope you enjoy these as much as we did.

Click here for a printable version of these recipes.

Method:
Preheat oven to 350 degrees.  Line 24 cupcake cups with paper baking cups.
In the bowl of an electric mixer, fitted with a paddle attachment, cream together the butter and sugars on high speed until light and fluffy - about 5 minutes.  Add the eggs, vanilla, cocoa, soda, and sat.  Mix well.  Combine the sour cream and the buttermilk.  With the mixer on low, add the flour and buttermilk mixture alternately, in thirds, beginning with the buttermilk and ending with the flour.  Mix the batter only until blended.

Scoop the batter into the prepared baking cups and bake in the center of the oven for 18 - 20 minutes, or until a toothpick comes out clean.  Cool to room temperature before frosting.

In the bowl of an electric mixer, combine the sugar, egg whites, water, and cream of tartar.  Whisk until combined.  Set the bowl over a pan of simmering water, making sure that the water does not touch the bottom of the bowl.  Whisk together over the water until the sugar is dissolved and the mixture is warm to the touch - about 3-5 minutes.  Transfer the bowl to the mixer which has been fitted with the whisk attachment.  Beat on high speed for about 12 -15 minutes until the frosting forms stiff peaks.  Add vanilla and beat to combine. 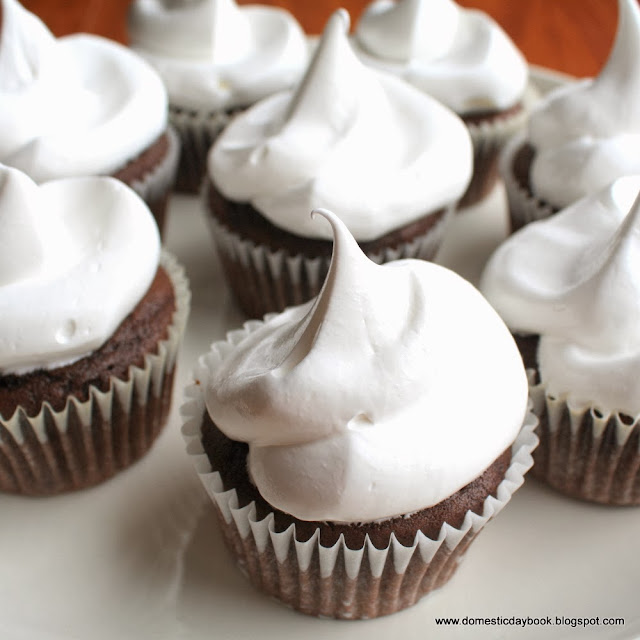