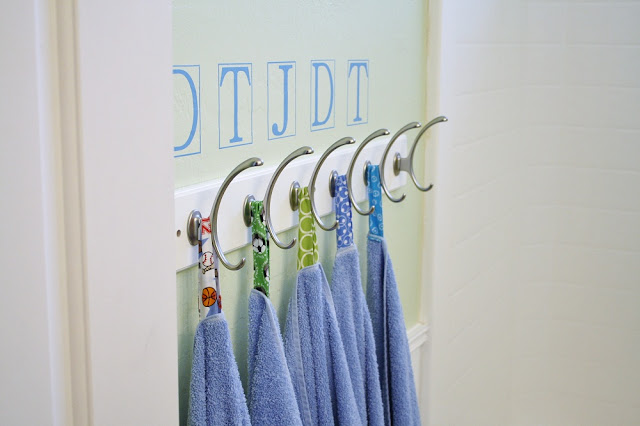 This project has been on my 100 projects list for a looooooong time.  It is actually one of the reasons that I sometimes get bothered by Pinterest.  Long ago, I came up with this idea in my own head - but now, thanks to Pinterest, it looks like I just stole this idea from Martha Stewart or some creative blogger out there.  Now don't get me wrong - I have stolen many an idea from those creative people.  But when I come up with an idea on my own, I would like a little credit.  At least in my own neighborhood.  Oh well.  Pinterest, I really love you, but sometimes you totally bug.

Soooo, as part of our boys bathroom update this summer, we took down the standard towel bar and replaced it with a hook board. Then the boys each picked a fabric they liked out of my scraps and I made a fabric loop and sewed it on their towel.  I also cut their initial out of vinyl and hung it above each hook, so the boys could easily identify which towel is theirs and where they need to hang it back up when they are done.  We had a little training session on how to correctly use the new towels and hooks and since then - it has been like magic.  I have only had to give out two or three reminders to hang towels back up.  The new system has been working great all summer.  And, they look totally cute too.  Bonus!!

***I will be posting soon about the rest of the "boy friendly" changes we made to our little bathroom.